Collection of notable flutists who have made publicly available recordings of the flute repertoire represented on the MASTERING the FLUTE website. 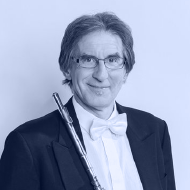 Michael Faust is a German flutist who initially studied flute with Cäcilie Lamerichs in Cologne, then with Karlheinz Zöller in Hamburg and Aurèle Nicolet in Basel.
He started his professional career in 1979 as the solo flutist with the Orchestra di Santa Cecilia in Rome. Later he held that same position with the Hamburg Philharmonic Orchestra and the Munich Philharmonic Orchestra under Sergiu Celibidache. In 1986 he was the first German who won the prestigious Pro Musicis Award in New York which led to various solo appearances around the world, including St Louis Symphony, NDR Symphony Orchestra Hamburg, and the Bayerische Rundfunkorchester.
Since 1988 he has been the Solo Flute with the WDR Sinfonieorchester in Cologne. He teaches flute at the Musikhochschule in Düsseldorf.

Bach J.S. Sonata in A Major for transverse flute and harpsichord (BWV 1032)